Born on a Blue Day by Daniel Tammet is one of the books I requested for Christmas. Reading the first chapter, my thought was, “Wow, this guy’s brain is so different than mine. I really can’t relate to what he’s saying, but it will be fascinating to continue reading about such a unique mind.” A few pages into the second chapter, my thoughts changed to, “Wow, I really relate to this guy!” 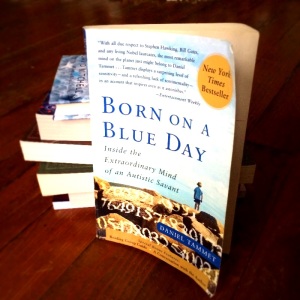 This was a wonderful read. To me, one of the many reasons is he’s in my age group- he was born a few years before me, but wrote the book when he was slightly younger than I am now. I enjoyed having that common ground. I was amazed by how eloquently and understandably he explains what it’s like inside his extraordinary savant mind. The first chapter was a bit awkward to get through, but reflecting back on the entire book I believe it was exactly the right choice – it sets the stage that this young man is *different*, which makes the later moments so meaningful.  He’s not only brilliant, but incredibly brave.

One thing that struck me early on was how blessed he was to have his parents. They seem like those unsung, everyday heroes: the parents who love their children unconditionally, respect their unique needs, encourage them to take baby-steps out of their comfort zones, and make sacrifices to help them succeed.  That’s one of the things Daniel and I have in common.

Near the end of the book he describes his experiences filming this documentary, Brainman – I can’t wait to watch it!

“The boy whose brain could unlock autism,” by Maia Szalavitz

I stumbled upon this piece when browsing facebook.  It’s quite long, but talks about some fascinating research (I had heard of “autistic symptoms in rats” in studies, but didn’t know what that was supposed to look like).  I was of course interested to reach the parts on empathy, such as:

Indeed, research on typical children and adults finds that too much distress can dampen ordinary empathy as well. When someone else’s pain becomes too unbearable to witness, even typical people withdraw and try to soothe themselves first rather than helping—exactly like autistic people. It’s just that autistic people become distressed more easily, and so their reactions appear atypical.

Why I’m still disabled, even though I’m brilliant (or so people tell me)

This is another great piece in the same vein as my last post.  I was going to pick a line or two to quote, but I couldn’t decide!  Just go read the whole thing 🙂

After reading the Musings of an Aspie post that led to my self-diagnosis, I read several more of her entries.  This is one I read with a special hunger, because I too was labeled “gifted” as a kid and we didn’t know I had Aspergers.  Unlike Cynthia Kim, I didn’t have a great gifted program at my school.  I was in 1st grade when I received the diagnosis and the next year  I was thrown in with some older kids (scary!) for the weekly activities. (If I recall correctly I was the first one in my grade to go, but one other girl may have started at the same time.)  I only have two clear memories of the program.  The first is building towers with straws in the library; I was frustrated when we were done and I saw the superior techniques the other kids had used. The second was using an SLR camera. We were given note cards saying what we were to photograph, and mine said “blacktop” – I was super embarrassed when I had to ask the teacher what it was and she told me I was standing on it.  Today I asked Mom a few questions to check my own memories of the timeline. She said she talked to my 2nd grade gen-ed teacher and they agreed that to me it felt more like a punishment, so they let me quit the program.

Fortunately I wasn’t permanently deterred from learning how to use an SLR.

In fifth grade a went to a different school (I was bored; they promised I could work at my own pace; they lied).  I enjoyed the gifted program there, mostly because I had a crush on one of the boys.  When I returned to public school the next year I continued in the program.  From what I recall the teacher was pretty cool and really nice to me, but my peers. . . well. . . they were all girls, and at this point the bullying and social awfulness had started (and in junior high the gifted class ended up being one of my worst settings socially).  But that’s a topic for another day.  In 9th the teacher who normally had the gifted kids for a period was ill, and the sub didn’t do much with us, so it was basically a fun study hall. That was my last experience with the gifted program.  Junior and senior high were academically better for me because there were accelerated and AP courses to take.

Back to the post titled “The Doubly Exceptional Child Grows Up.”  I hope you’ll read it in its entirety, but here are a few of my favorite key quotes:

Adults wrote off our quirks as a byproduct of our intelligence. They sent us out to the playground and expected us to figure out how to navigate the social minefields that lurked within kickball games and jump rope circles. We were smart. We would get it eventually.

When you arrive in adulthood lacking the social skills that most people have mastered by sixth grade, life becomes exponentially more confusing and hard to navigate. For much of my adulthood, I’ve had the odd belief that someday I would “grow up” and suddenly feel like an adult. That I was just a little behind the curve when it came to social skills and one day everything would magically fall into place.

A final note for today about giftedness. When I was in college, I took as an elective an education course titled Psychology of the Exceptional Child (special education).  Our wonderful professor put the bell curve up on the board, and reminded us that two standard deviations below the mean on an IQ test meant a child received an MR diagnosis (now Intellectual Disability) whereas children two standard deviations above the mean were labeled Gifted. Children in the first group generally spend most of their school day in a special classroom, and children in the second group spend maybe an hour a week in a special classroom. Yet the second group is just as different from their typical peers as the first group is. That kinda blew my mind, and it helped me feel a little more understanding towards myself. It also helped explain why I felt so very different, though I hadn’t yet discovered the biggest missing puzzle piece.

Hmm.   I wonder about the percentage of people at the right end of the bell curve who are also Aspies.  Let’s research. . . first interesting Google result- here’s a great article about Gifted children with Asperger’s Syndrome  – it includes a chart showing some differences between Gifted and AS kids as well as some strategies for helping the AS kids.  I’m heading down a rabbit trail and have “real life” stuff to work on today, but I’d love to look into this more.  If you have any thoughts or research to share, leave a comment!